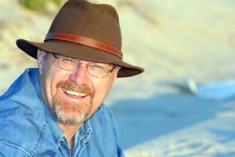 Deon Meyer was born in the South African town of Paarl in the winelands of the Western Cape in 1958, and grew up in Klerksdorp, in the gold mining region of Northwest Province.

After military duty and studying at the Potchefstroom University, he joined Die Volksblad, a daily newspaper in Bloemfontein as a reporter. Since then, he has worked as press liaison, advertising copywriter, creative director, web manager, Internet strategist, and brand consultant.

Deon wrote his first book when he was 14 years old, and bribed and blackmailed his two brothers into reading it. They were not impressed (hey, everybody is a critic ...)

Heeding their wisdom, he did not write fiction again until he was in his early thirties, when he started publishing short stories in South African magazines.

“I still believe that is the best way to learn the craft of writing. Short stories teach you a lot about story structure - and you have limited space to develop character and plot,” says Deon.

In 1994 he published his first Afrikaans novel, which has not been translated, “simply because it was not good enough to compete on the international market. However, it was a wonderful learning experience”.

Deon lives in Melkbosstrand on the South African West Coast with his wife, Anita, and they have four children to keep them busy: Lida, Liam, Johan and Konstanz.

Other than his family, his big passions are motorcycling, music (he is a Mozart fanatic, but loves rock ‘n roll too), reading, cooking and rugby (he unconditionally supports the national Springbok team and the Free State Cheetahs provincial team).

The Woman in the Blue Cloak