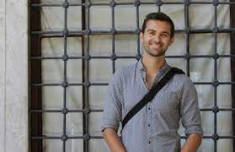 In 2011, while living in Beijing, China and building his own science communication business, Ben was diagnosed with colorectal cancer. He was 28 years old. He returned to Australia and underwent 18 months of treatment, which included radiotherapy, chemotherapy and surgery.

After treatment, Ben needed a change. He decided to become a doctor. He completed a MBBS with Honours from the University of Notre Dame Australia in 2018 and is now undertaking speciality training in Psychiatry.

In his previous life as a zoologist and science communicator, Ben worked for the Commonwealth government, Chinese government, a medical research facility and an environmental NGO. He’s lived and worked in Canberra, Darwin and Sydney, as well as in Hainan and Beijing in China.

Ben grew up in Queensland, Australia. In addition to his medical degree, he has a Bachelor of Science with Honours from the University of Queensland (majoring in zoology and animal behaviour) and a Graduate Diploma in Science Communication from the Australian National University.

Ben’s memoir, The Patient Doctor, will be published in 2022 by Hachette Australia.