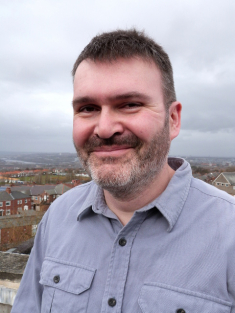 Gateshead-based Dr Simon Morden trained as a planetary geologist, realised he was never going to get into space, and decided to write about it instead. His writing career includes an eclectic mix of short stories, novellas and novels which blend science fiction, fantasy and horror, a five-year stint as an editor for the British Science Fiction Association, a judge for the Arthur C Clarke Awards, and regular speaking engagements at the Greenbelt arts festival.

Simon has written ten novels and novellas. The wonderfully tentacular Another War (2005), was shortlisted for a World Fantasy Award, and 2007 saw the publication of The Lost Art, which was shortlisted for the Catalyst Award. The first three books starring everybody’s favourite sweary Russian scientist, Samuil Petrovitch (Equations of Life, Theories of Flight, Degrees of Freedom) were published in three months of each other in 2011, and collectively won the Philip K Dick Award - the fourth Petrovitch, The Curve of the Earth, was published in 2013. In a departure to the usual high-tech mayhem, 2014 saw the arrival of Arcanum, a massive (and epic) alternate-history fantasy, which not only has flaming letters on the cover, but the story inside is “enthralling”, “intelligent”, “impeccably rendered” (Kirkus), and “engrossing”, “satisfying” and “leaving the reader craving for more (Publishers’ Weekly). Which was nice.

The Books of Down are a very different fantasy, where what you are is what you become: Down Station tells the trials and triumphs of Down’s latest refugees on the run from a disaster that might just have destroyed all of London, and The White City their continuing story to unravel the mysteries of their adopted world.

What have become known as ‘the Mars books’, One Way and No Way, were commissioned by Gollancz in late 2016, and have taken on a life of their own. Marking a return to a more brutal, no-holds-barred science fiction, One Way and No Way are guaranteed scientifically accurate and utterly compelling fiction.