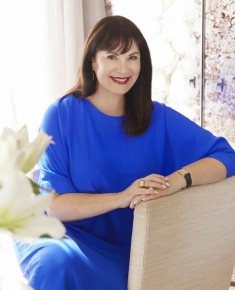 I began my media career while I was still a student at the University of Sydney, performing voice-overs for TV and radio commercials (I hereby confess to being the “We Try Harder” Avis Girl).

After graduating with Honours in Government, I spent six months as an international intern on the staff of a Congressman in Washington DC. I returned to Australia to work as a reporter and newsreader on a regional television station in Queensland.

Back in Sydney, possessed by a long-term fascination with fashion and a passion for writing, I became a regular contributor of feature articles, interviews and reviews for major national and metropolitan publications including The Australian, Sydney Morning Herald Good Weekend Magazine, Cleo and Harper’s Bazaar.

A mid-life career change, inspired by my role as the President of The Royal Hospital for Women Foundation, saw me undertaking postgraduate studies in Applied Psychology and the establishment of a successful psychotherapy practice.

A decade later, I found I was once more unable to resist the lure of the written word. My memoir, Rosetta: A Scandalous True Story, has been optioned for the screen by a major studio.

My first novel, The Paris Model (2020) was not only an Australian bestseller (thank you, lovely readers) but was published in the United States and Canada with Europe to follow in 2021.

Even better, my latest novel, The Royal Correspondent was published in Australia in February 2021 and has already been sold to North America. A dream come true!

I have two beautiful children and live in Sydney with my husband.

I’m also a keen student of art, fashion, history and politics and am exceedingly fond of Paris.