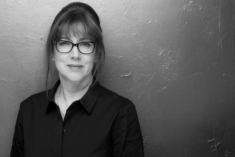 Lauren B. Davis’s most recent novel is EVEN SO, a chronicle of two people, one a Catholic nun, the other a privileged and careless Princeton matron, as they wrestle with the challenges and transformative power of acceptance and love without caveats. Named as one of the best novels of the year by Quill & Quire.

“Lauren B. Davis never misses. EVEN SO is a book filled with beautiful sentences; it dives deep into the mess that is the human condition. But for all its artistry, the novel moves like a cheetah. This is as good as the modern novel gets.” - David Worsley, Words Worth Books.

THE GRIMOIRE OF KENSINGTON MARKET, is a modern fairy tale about addiction and the bonds of love. Called “timely and important” by the Toronto Star, “enchanting” by the Temz Review, and named “One of the Best Books of the Year” by the Globe & Mail.

AGAINST A DARKENING SKY, set in 7th c. England. Pulitzer-Prize winning author, Robert Olen Butler said this about the novel: “Lauren B. Davis’s Against a Darkening Sky brilliantly achieves the ideal for a historical novel: period and milieu seem utterly inextricable from character and theme, and together they illuminate timeless and universal truths of the human condition. Seventh-century England is fascinating. Wilona is achingly real. Her quest for an identity and a place in the world are richly resonant. Davis is a remarkable writer.”

Her other works include:

The bestselling novel, THE EMPTY ROOM, a searing, raw and powerful a portrayal of the chaos and pain of alcoholism. Named one of the “Best Books of the Year” by The National Post, and the Winnipeg Free Press, “Editors’ Pick” by Amazon and a “Critics’ Pick” by The Coast (Nova Scotia). Told with compassion, insight and an irresistible gallows humor, THE EMPTY ROOM takes us to the depths of addiction, only to find a revelation at its heart: the importance and grace of one person reaching out to another.

Her previous novel, OUR DAILY BREAD, was longlisted for the Scotiabank Giller Prize and named as one of the “Best Books of the Year” by The Globe & Mail and The Boston Globe.

She is also the author of the bestselling and critically acclaimed novels, THE RADIANT CITY, a finalist for the Rogers Writers Trust Fiction Prize; and THE STUBBORN SEASON, a named as one of the Top 15 Bestselling First Novels by Amazon.ca and Books in Canada. She has also published two short story collections, AN UNREHEARSED DESIRE and RAT MEDICINE & OTHER UNLIKELY CURATIVES. Her short fiction has been shortlisted for the CBC Literary Awards, the ReLit Award and she is the recipient of two Mid-Career Writer Sustaining grants from the Canadian Council for the Arts. Lauren has reviewed books for Truthdig.com, THE GLOBE & MAIL and THE LITERARY REVIEW OF CANADA. A well-respected creative writing teacher who has taught in Geneva, Paris and Ireland, as well as in the USA and Canada, she is also a past Mentor with the Humber College Creative Writing by Correspondence Program, and past Writer-in-Residence at Trinity Church, Princeton. She now leads SHARPENING THE QUILL writing workshops in Princeton, New Jersey.

Lauren was born in Montreal but lived in France for ten years from 1994-2004. She and her husband, Ron, moved to Princeton in 2004, where they now live with their dog, Bailey, known as the Rescuepoo.

The Grimoire of Kensington Market

Against a Darkening Sky