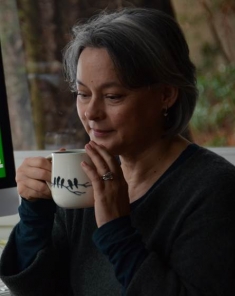 She may be best known for her acclaimed Golden Globe-winning lead performance in the movie “Agnes of God,” but Meg Tilly is taking on an exciting new persona these days, as a romance novelist.

After successfully publishing six standout young adult and literary women’s fiction novels, the Canadian American actress/author decided to write the kind of books she loves to read—romance novels. She self-published SOLACE ISLAND, a romantic suspense set in the Pacific Northwest, to rave reviews in spring 2017. However, that experience taught her she’s happiest when she’s writing and not involved in the myriad tasks of publishing. She closed out 2017 by signing with Berkley Books for three novels, including a new, improved edition of SOLACE ISLAND which was released on November 6, 2018. Book 2 in Meg’s series, CLIFF’S EDGE, will be published in May 2019.

At the age of 14, the multi-talented Tilly started dance lessons and developed into a gifted ballet dancer. After she danced in the movie “Fame,” a serious back injury forced her to give up ballet, and she turned her creative energy to acting. Moving to Los Angeles and studying with renowned acting teacher Peggy Fuery, she subsequently landed television roles and then her first film, “Tex,” opposite Matt Dillon. Shortly thereafter she booked the role of Chloe in “The Big Chill.” Then came her performance in the title role of “Agnes of God.” Tilly’s portrayal of a novitiate nun who confesses her involvement in a virginal conception, opposite Jane Fonda and Anne Bancroft, garnered that Golden Globe Award and an Academy Award nomination. Other film credits include “Valmont,” “The Two Jakes,” “Leaving Normal” “Masquerade” and “Body Snatchers.”

In 1994, Tilly decided to take a break from acting to focus on raising her children. She continued to study and grow as a writer. SINGING SONGS (Penguin/Dutton, a Barnes & Noble Great New Writers Selection 1994) was her first novel, followed by another adult novel, GEMMA (St. Martin’s Press). Her first YA novel, PORCUPINE (Tundra Books), was shortlisted for a BC Book Prize, The Canadian Libraries Association Best Children’s Book 2008, Foreword Magazine Book of the Year, Ontario Library Best Bets 2008 and was a finalist for the Sheila A Egoff Children’s Literature Prize. Next came FIRST TIME (Orca), a 2009 Golden Eagle Award Nominee, a 2009 YALSA Quick Picks and 2010 CCBC Best Books. Her fifth novel, A TASTE OF HEAVEN (Puffin Books) was shortlisted for the 2014 Libris Young Reader Book of the Year, a 2014 Diamond Willow Award and won the 2014/15 Chocolate Lilly Award. BEHIND THE SCENES (Puffin) was published in 2014

When her youngest child went off to college, Tilly decided to dip her toe back into the acting world. She landed the role of Lorna Corbett in the popular Canadian “Bomb Girls” series (2012-2014), which won the Gracie Award for Best TV Drama.

Tilly has most recently been seen opposite Brad Pitt in the 2017 Netflix feature film “War Machine.” Directed by David Michod, the film is a satire of America’s war with Afghanistan and the people running the military campaign. Tilly plays the role of the almost-too-patient wife of the General (Pitt).

Tilly has three grown children and resides with her husband in the Pacific Northwest. She is currently at work writing the third Solace Island novel for Berkley Books.