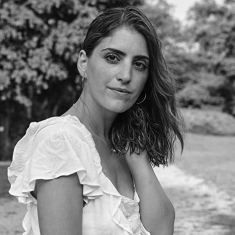 Suleika Jaouad (pronounced Su-lake-uh Ja-wad) is the author of the debut memoir, Between Two Kingdoms. She wrote the Emmy Award-winning New York Times column “Life, Interrupted” and has written reported features, essays and commentary for The New York Times Magazine, The Atlantic, Vogue, and NPR, among other publications. A highly sought-after speaker, her mainstage TED Talk was one of the ten most popular of 2019 and has nearly four million views. She is also the creator of the Isolation Journals, a community creativity project founded during the Covid-19 pandemic to help others convert isolation into artistic solitude; over 100,000 people from around the world have joined.Born in New York City to a Tunisian father and a Swiss mother, Suleika attended The Juilliard School’s pre-college program for the double bass, and earned her BA with highest honors from Princeton University and an MFA in writing and literature from Bennington College.

Suleika’s career aspirations as a war correspondent were cut short when, at age 22, she was diagnosed with leukemia. She began writing her New York Times column “Life, Interrupted” from her hospital room at Sloan-Kettering, and has since become a fierce advocate for those living with illness and enduring life’s many other interruptions.

Suleika served on Barack Obama’s Presidential Cancer Panel, the national advisory board of the Bone Marrow and Cancer Foundation, and the Brooklyn Public Library’s Arts & Letters Committee. She was awarded the Red Door Advocacy & Community Service Award, and has been an artist in residence at Ucross, ArtYard, and the Kerouac Project.

Suleika travels the world teaching workshops and speaking, and she was an Anacapa Scholar in Residence at the Thacher School and a lecturer in the Narrative Medicine Program at Columbia University. She has appeared on the Today Show, NPR’s Talk of the Nation, the Paris Review, the Los Angeles Times and Glamour, among others.