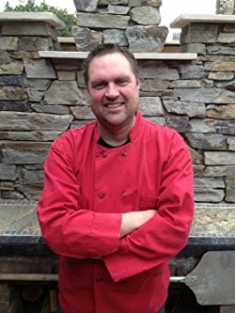 Chef Jason Wyrick is the executive chef of The Vegan Taste, the author of Vegan Tacos: Authentic and Inspired Recipes for Mexico’s Favorite Street Food, and co-author of NY Times Bestseller 21 Day Weight Loss Kickstart. In 2001, Jason was diagnosed with diabetes in his mid-20s and was told he would have to be on medication for the rest of his life. Instead, Jason became vegan, reversed his diabetes in eight months, and lost over 100 pounds over the course of two years. Along the way, he learned about factory farming, cementing his decision to become vegan. He also learned that the food had to be outstanding, or no one was going to eat it!

He then left his job as the director of marketing for a computer company in order to become a chef and help others learn how to eat healthfully, compassionately, and well. Since then, he has co-authored the NY Times Bestselling book 21 Day Weightloss Kickstart with Neal Barnard, MD, has taught alongside Dr. Barnard, Dr. McDougall, and Dr. Cousens, became the first vegan culinary instructor in the world-famous Le Cordon Bleu program through the Scottsdale Culinary Institute, founded the world’s first vegan food magazine, The Vegan Culinary Experience, has presented for the American Dietetic Association and the American Diabetes Association, Humana, The Wellness Community, Farm Sanctuary, and is a regular guest at the Scottsdale Culinary Festival.

He has catered for organizations as prestigious as Google, the Frank Lloyd Wright Foundation, Peta, and Farm Sanctuary and has been featured in the NY Times, and on both local and national television. He has taught hundreds of vegan cooking classes all across the United States and has taught internationally in both Costa Rica and Italy. His recipes have appeared in Vegetarian Times and have been featured in several of Dr. Neal Barnard’s books. Most of all, Chef Jason loves good food and loves sharing it with others.