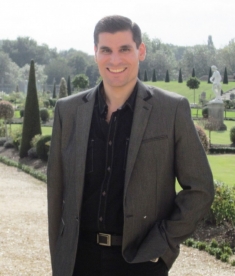 Dr Chris Laoutaris is a biographer, historian and lecturer at The Shakespeare Institute in Shakespeare’s birthplace of Stratford-Upon-Avon. His most recent book, Shakespeare and the Countess: The Battle that Gave Birth to the Globe (Pegasus/Penguin), was shortlisted for the Tony Lothian Prize for Biography, was Observer Book of the Year, Telegraph Book of the Year, one of the New York Post’s ‘Must-Read Books’, one of the Daily Telegraph’s top ten history holiday reads, and made it into the Bookseller’s top ten most reviewed books for the season of its release. Laoutaris recently signed a two-book deal with HarperCollins in the United Kingdom, whose William Collins imprint scored the rights in competition with several other major commercial publishers. Pegasus Books secured the contract for Laoutaris’ next two books in North America.

The recipient of two major Fellowships from the British Academy (Post-Doctoral Fellowship) and the Shakespeare Institute (University of Birmingham, Birmingham Fellowship), Laoutaris received his doctorate from University College London where he was also a lecturer and Renaissance Literature Course Convenor before moving to the Shakespeare Institute. He is holder of the Morley Medal in English, the Ker Memorial Prize in English, and was shortlisted for the Eric Gregory Poetry Awards.

Laoutaris is the author of an academic monograph, Shakespearean Maternities: Crises of Conception in Early Modern England; is contributor to two of Ashgate Press’s Studies in Performance and Early Modern Drama series of books and the Cambridge Companion to Shakespeare’s First Folio; has written articles on Renaissance women, portraiture and political coteries; and has completed a study of activist female translators and historical writers for Palgrave Macmillan’s History of British Women’s Writing: 1500-1610, which won the Society for the Study of Early Modern Women Collaborative Project Award.

Shakespeare and the Countess
Prev: Claude Lanzmann
Next: Storm Large