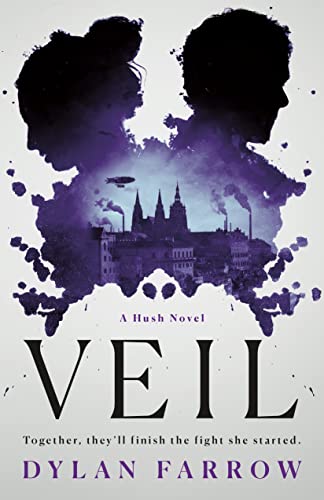 "[A] fast-paced and thought-provoking read that will keep readers on their toes until the intense end." - Young Adult Books Central Dylan Farrow's Veil is the thrilling sequel to Hush, one of the most talked about YA fantasies of 2020.

Shae’s entire world has been turned upside down, and everything she’s ever believed is a lie. More determined than ever, she sets out to the mysterious land of Gondal—a place forbidden to mention and resigned to myth—in search of a dangerous magical book that could alter the fabric of the world.

Following the trail of Ravod, the boy she thought she knew and trusted, Shae discovers there is far more to the young man who stole the Book of Days than she ever realized. Together, with her friends, Mads and Fiona, and a newfound ally in her fierce former trainer, Kennan, Shae crosses the borders of the only home she’s ever had and into a world ruled not by magic, but technology and industry—one fraught with perils of its own.

In a world shrouded in lies, Shae is desperate for answers and to restore peace, but who will lift the veil?