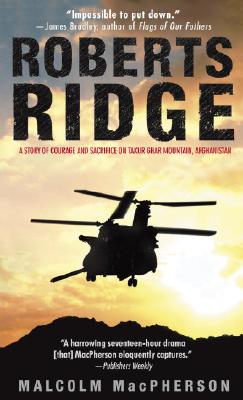 Afghanistan, March 2002. In the early morning darkness on a frigid mountaintop, a U.S. soldier is stranded, alone, surrounded by fanatical al Qaeda fighters. For the man’s fellow Navy SEALs, and for waiting teams of Army Rangers, there was only one rule now: leave no one behind. In this gripping you-are-there account-based on stunning eyewitness testimony and painstaking research-journalist Malcolm MacPherson thrusts us into a drama of rescue, tragedy, and valor in a place that would be known as…

For an elite team of SEALs, the mission seemed straightforward enough: take control of a towering 10,240-foot mountain peak called Takur Ghar. Launched as part of Operation Anaconda-a hammer-and-anvil plan to smash Taliban al Qaeda in eastern Afghanistan -the taking of Takur Ghar would offer U.S. forces a key strategic observation post. But the enemy was waiting, hidden in a series of camouflaged trenches and bunkers-and when the Special Forces chopper flared on the peak to land, it was shredded by a hail of machine-gun, small arms, and RPG rounds. A red-haired SEAL named Neil Roberts was thrown from the aircraft. And by the time the shattered helicopter crash-landed on the valley floor seven miles away, Roberts’s fellow SEALs were determined to return to the mountain peak and bring him out-no matter what the cost.

Drawing on the words of the men who were there-SEALs, Rangers, medics, combat air controllers, and pilots-this harrowing true account, the first book of its kind to chronicle the battle for Takur Ghar, captures in dramatic detail a seventeen-hour pitched battle fought at the highest elevation Americans have ever waged war. At once an hour-by-hour, bullet-by-bullet chronicle of a landmark battle and a sobering look at the capabilities and limitations of America’s high-tech army, Roberts Ridge is the unforgettable story of a few dozen warriors who faced a single fate: to live or die for their comrades in the face of near-impossible odds.