“The compelling premise pulls all our paranoid strings, and Swierczynski, like a mad scientist twirling dials, ratchets the tension ever tighter.... Stay tuned for part three of what may be the most unusual thriller series in a long, long time.”

— Booklist on Hell and Gone 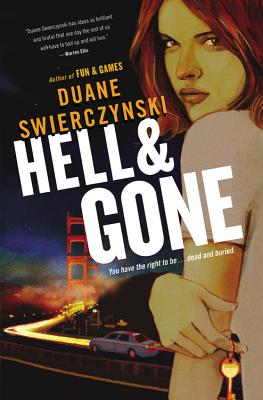 Left for dead after an epic shootout that blew the lid off a billion-dollar conspiracy, ex-cop Charlie Hardie quickly realizes that when you’re dealing with The Accident People, things can get worse. Drugged, bound and transported by strange operatives of unknown origin, Hardie awakens to find himself captive in a secret prison that houses the most dangerous criminals on earth.

And then things get really bad. Because this isn’t just any prison. It’s a Kafkaesque nightmare that comes springloaded with a brutal catch-22: Hardie’s the warden. And any attempt to escape triggers a “death mechanism” that will kill everyone down here—including a group of innocent guards. Faced with an unworkable paradox, and knowing that his wife and son could be next on the Accident People’s hit list, Hardie has only one choice: fight his way to the heart of this hell hole and make a deal with the Devil himself.