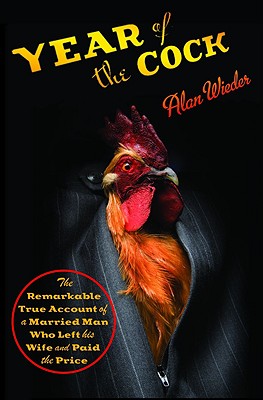 Year of the Cock: The Remarkable True Account of a Married Man Who Left His Wife and Paid the Price

​Thirty-year-old Alan Wieder has everything a man could possibly want: a nice home in , a thriving Hollywood career, and to top it all off, a beautiful and adoring wife. Then one day in 2005 - the Year of the Rooster - he wakes up with questions: Have I settled down too soon? Am I consigned to a humdrum future of marriage, kiddies, home-cooked meals and hybrid SUVs? How the %&! did this happen to me?

And just like that - after ten years in a committed relationship - Alan decides to walk out on his wife to pursue his fantasy of becoming a hardcore bachelor. Explaining very little, thinking even less, he dives into his exhilarating new single existence - buying a vintage Porsche, moving into a tastefully decorated bachelor pad, ignoring his wife, and bedding as many chicks as possible. However, to Alan’s surprise and dismay, becoming a single dude also unleashes in him a torrent of crippling insecurities that he didn’t even know he had. And soon, his would-be swingin’ bachelorhood is cut short - very short - by a strange and shameful obsession that drives him to utter madness.

Some men leave their wives only to discover that the grass isn’t greener. What Alan Wieder discovers - about the perils of newfound freedom, and about his own fragile male psyche - is far more agonizing and wretched. In this riveting and brutally honest memoir, Alan recounts the true story of his impulsive, wild, and ultimately disastrous foray into bachelorhood. A tragicomic tale of betrayal, sexual (mis)adventure, and ultimately redemption, Year of the Cock marks the debut of a remarkably talented new writer.

Prev: Yeah, No. Not Happening.
Next: Yes, Chef