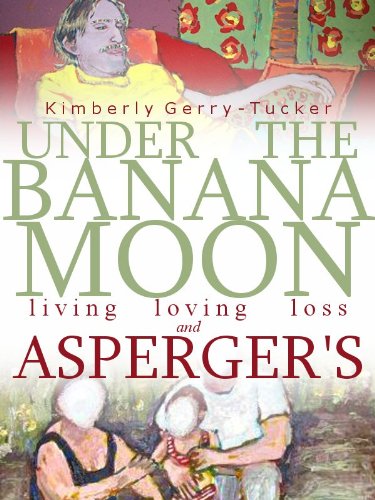 Under the Banana Moon

A True Story of Living, Loving, Loss and Asperger's

To Kim Tucker, solidly in the Asperger’s section of the autism spectrum, the colors blue and green and gray are not just colors, but rather whole worlds of iridescent life. Likewise, to say that Under the Banana Moon is full of laughter and love and heartbreak is to only scratch the surface.

Growing up, Kim couldn’t speak when there was more than one person present, and sometimes even then her words failed her. But she could always write. More comfortable in the company of cats, or passing notes to grandmother, she found peace where she could, and avoided the frightful parts of the world—like anything that was the color green. But school brought whole new worlds of fear: other kids. Their words and feelings were indecipherable. Their touch was toxic. She survived with scars. As a teenager, she felt the same urges as her peers but went about it in extreme ways: when she drank, she went to the hospital; when she dated, she got married. Her husband, Howie, was her high school sweetheart. He was also her best friend and the father of her three children. He took care of her and managed her disability. When he was diagnosed with ALS, their roles reversed, the world collapsed—but they kept going. Some things Kim could never learn (like how to drive a car… without crashing), but some things she could. Like how to help her husband die, and how to live to tell the story.

In her book, as in her life, tears and laughter are like a rhyming couplet, similar expressions of the same deep feeling. Only with both can Kim tell her story which is, in the end, about perseverance, and joy, and love beyond lifetime.

Prev: Under a Blood Red Moon
Next: Under the Cold Bright Lights