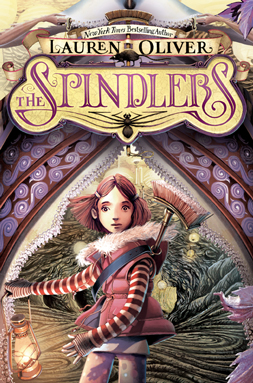 When Liza’s younger brother Patrick’s soul is stolen by the evil Spindlers, spider-like creatures who live underground, she knows she must set out on a heroic quest to the world below to rescue it.

A concealed hole in the wall behind a narrow bookcase in her family’s basement is her entry, and amid loud scratching noises, Liza trips, falling down into the darkness Below. Mirabella, a giant rat who wears newspaper for a skirt, becomes her trusted guide to the spindlers’ nests, which Liza must reach before the Feast of the Souls. But things are never what they seem in Oliver’s vividly imagined world. ... An arduous, dangerous and fantastical journey ensues.

As in the author’s first terrific book for middle-grade readers, Liesl & Po (2011), there is a smorgasbord of literary references, including strong echoes of Alice’s Adventures in Wonderland. It is laced with humor and engaging wordplay, as well as riddles and death-defying tests and enchantments. Wholly original creatures populate the tale, some reassuring and wise, like the nocturni and lumer-lumpen, others wonderfully macabre (and ferocious), like the queen of the spindlers and the shape-shifting scawgs. In the course of her episodic quest, Liza discovers she is resourceful and brave; she sees things differently than before.

Prev: The Spice Master at Bistro Exotique
Next: The Spiritualist