“Condensed with information that is both well-researched and well-placed within textbook history, [Brown’s] book is a rewarding read. It is an important book for the time—a sober reflection on the physical, objective results of ideological thought.”

— Sacramento Book Review on The Rise and Fall of Communism 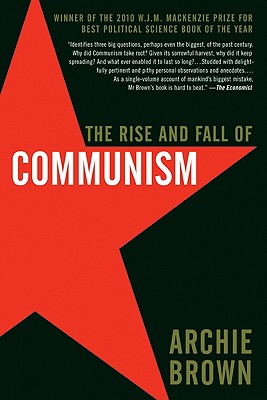 The Rise and Fall of Communism

From the internationally acclaimed Oxford authority on Communism, a definitive history that examines the origins of the ideology, its development in different nations, its collapse in many of those countries following perestroika, and its current incarnations around the globe.

The Rise and Fall of Communism explores how and why Communists came to power; how they were able, in a variety of countries on different continents, to hold on to power for so long; and what brought about the downfall of so many Communist systems.

For this comprehensive and illuminating work, Brown draws on more than forty years of research and on a wealth of new sources. Tracing the story of Communism from its nineteenth-century roots, Brown explains both its expansion and its decline in the twentieth century. Even today, although Communism has been widely discredited in the West, more than a fifth of humanity still lives under its rule.

Prev: The Rise and Fall of Alexandria: Birthplace of the Modern World
Next: The Rise of Nuclear Iran