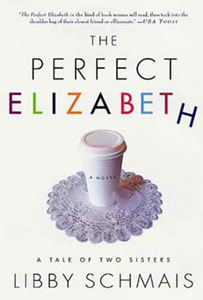 This modern-day Sense and Sensibility is a witty story about two sisters: Liza, a would-be poet who spends miserable days as a legal secretary; and Bette a graduate student writing her dissertation on Toast in the English Novel. Bette has taken to eating only what the characters she is writing about would eat: boiled eggs on toast, minemeat, nice cups of tea…Liza’s a bit concerned. She’s also worried about the status of her relationship with her actor boyfriend, Gregor. They’re not living together, and that’s a problem.

Then there’s the issue of Liza’s career, or lack thereof. Can dog-walking be considered a vocation? Liza’s beginning to think so. Mercifully, Bette is merely a local phone call away.
Throughout this hilarious novel, the sisters deal with unemployment, infidelity, interfering parents, Hollywood, lemmings, a pregnancy, and a wedding. The Perfect Elizabeth is as indulgent and cathartic as a pint of Haagen-Dazs.