— Publishers Weekly (Starred Review) on The Joy of Sexus 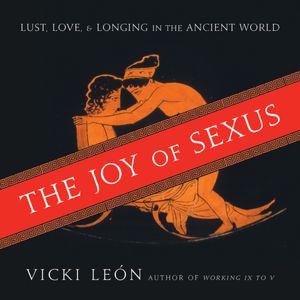 The Joy of Sexus

Lust, Love, and Longing in the Ancient World

In her previous books, Vicki León put readers in the sandals of now obsolete laborers, ranging from funeral clowns to armpit pluckers, and untangled the twisted threads of superstition and science in antiquity. Now, in this book of astonishing true tales of love and sex in long-ago Greece, Rome, and other cultures around the Mediterranean, she opens the doors to shadowy rooms and parts the curtains of decorum.León goes far beyond what we think we know about sex in ancient times, taking readers on a randy tour of aphrodisiacs and anti-aphrodisiacs, contraception, nymphomania, bisexuality, cross-dressing, and gender-bending. She explains citizens’ fear of hermaphrodites, investigates the stinging price paid for adultery despite the ease of divorce, introduces readers to a surprising array of saucy pornographers, and even describes the eco-friendly dildos used by libidinous ancients. Love also gets its due, with true tales of the lifelong bonds between military men, history’s first cougar and her devoted relationship with Julius Caesar, and the deification of lovers.

Prev: The Job
Next: The Key