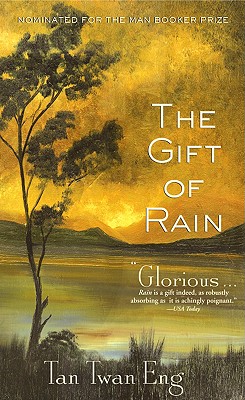 The Gift of Rain

The recipient of extraordinary acclaim from critics and the bookselling community, Tan Twan Eng’s debut novel casts a powerful spell and has garnered comparisons to celebrated wartime storytellers Somerset Maugham and Graham Greene. Set during the tumult of World War II, on the lush Malayan island of Penang, The Gift of Rain tells a riveting and poignant tale about a young man caught in the tangle of wartime loyalties and deceits.

In 1939, sixteen-year-old Philip Hutton-the half-Chinese, half-English youngest child of the head of one of Penang’s great trading families-feels alienated from both the Chinese and British communities. He at last discovers a sense of belonging in his unexpected friendship with Hayato Endo, a Japanese diplomat. Philip proudly shows his new friend around his adored island, and in return Endo teaches him about Japanese language and culture and trains him in the art and discipline of aikido. But such knowledge comes at a terrible price. When the Japanese savagely invade Malaya, Philip realizes that his mentor and sensei-to whom he owes absolute loyalty-is a Japanese spy. Young Philip has been an unwitting traitor, and must now work in secret to save as many lives as possible, even as his own family is brought to its knees.

Prev: The Gift Inside the Box
Next: The Gilded Seal