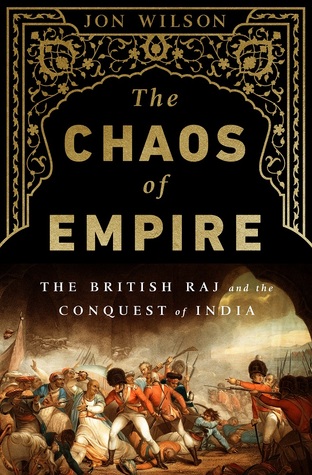 The Chaos of Empire

The British Raj and the Conquest of India

From the moment in the 1680s that the East India Company began to trade with the Mughal rulers of the port cities of Surat, Madras, Bombay, Calcutta, and Chittagong, the story of the Indian subcontinent was changed forever.

Before its dissolution in 1857, the officers of the East India Company had under their command more than a quarter of a million troops, and functioned not as a trading partner but a quasi-imperial government whose monopolistic habits and trade preferments included the tax on tea that led directly to the American Revolution. On its dissolution the Times reported: “It accomplished a work such as in the whole history of the human race no other company ever attempted and as such is ever likely to attempt in the years to come.” This was meant as a compliment, but it concealed a much more brutal truth.

From the famine of 1770 in which one third of the people living in the state of Bengal perished to the Anglo-Mughal wars and the later brutal repression of the Anglo-Afghan Wars, the story of the British in India was one of conflict and divide-and-rule, relentlessly applied from the relative security of the world’s most powerful naval vessels and the forts they supplied. Interspersed between the major wars were numerous minor conflicts, most lost to popular histories, which underscore the continual violence of the imperial project. In The Chaos of Empire, Jon Wilson uses the everyday lives of administrators, soldiers and subjects, British and Indian, to lift the veil of empire to show how British rule really worked. Far from the orderly Raj that its officials sought to portray, British rule in conquered India was chaotic and paranoid, and led to a succession of unstable states in South Asia and across the world. Most importantly, empire in India created a huge gap between image and reality, enabling a small number of people—a social and political elite—to project power across the world. Among its legacies were continual cycles of hubristic state enterprise followed by massive failure—up to and including the neo-imperial adventures in Afghanistan and Iraq now. Long after the end of empire, The Chaos of Empire argues that we still try to live by the myths created by the Raj.

At a time when Prime Minister Narendra Modi is arguing that Britain should pay restitution for the damage done to the Indian subcontinent under British rule, this comprehensive, dynamic, and fierce history of Britain’s rule is timely, provocative, and immensely readable.

Prev: The Changeling King
Next: The Chartreuse Clue