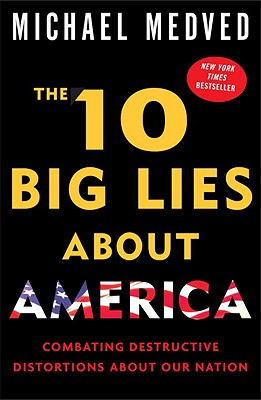 The 10 Big Lies About America: Combating Destructive Distortions About Our Nation

In this bold New York Times bestseller, acclaimed author and talk-radio host Michael Medved zeroes in on ten of the biggest fallacies that millions of Americans believe about our country–in spite of incontrovertible evidence to the contrary.

The Big Lies exposed and dissected include:

• America was founded on genocide against Native Americans. • The United States is uniquely guilty for the crime of slavery and built its wealth on stolen African labor. • Aggressive governmental programs offer the only remedy for economic downturns and poverty. • The Founders intended a secular, not Christian, nation.

Each of the ten lies is a grotesque, propagandistic misrepresentation of the historical record. Medved’s witty, well-documented rebuttal supplies the ammunition necessary to fire back the next time somebody tries to recycle destructive distortions about our nation.

Prev: That's Not English
Next: The 12-Step Bush Recovery Program