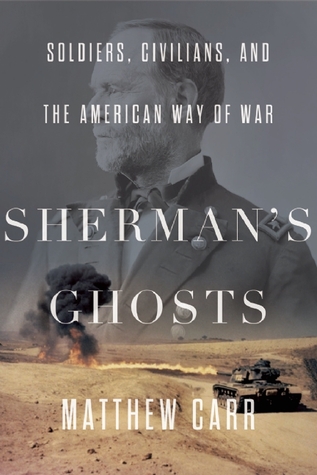 Soldiers, Civilians, and the American Way of War

“To know what war is, one should follow our tracks,” General William T. Sherman once wrote to his wife, describing the devastation left by his armies in Georgia. Sherman’s Ghosts is an investigation of the “tracks” left by the wars fought by the American military in the 150 years since Sherman’s infamous “March to the Sea.”

Sherman’s Ghosts opens with an epic retelling of General Sherman’s fateful decision to turn his sights on the South’s civilian population in order to break the back of the Confederacy. Acclaimed journalist Matthew Carr then exposes how this strategy became the central preoccupation of war planners in the twentieth century and beyond, offering a stunning and lucid assessment of the impact Sherman’s slash-and-burn policies have had on subsequent wars, including in the Philippines, World War II, Korea, Vietnam, and even Iraq and Afghanistan.

In riveting accounts of military campaigns and in the words and writings of American fighting men and military strategists, Carr finds ample and revealing evidence of Sherman’s long shadow.Sherman’s Ghosts is a rare reframing of how we understand our violent history and a call to action for those who hope to change it.