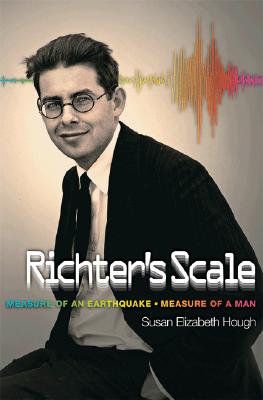 By developing the scale that bears his name, Charles Richter not only invented the concept of magnitude as a measure of earthquake size, he turned himself into nothing less than a household word. He remains the only seismologist whose name anyone outside of narrow scientific circles would likely recognize. Yet few understand the Richter scale itself, and even fewer have ever understood the man.

Drawing on the wealth of papers Richter left behind, as well as dozens of interviews with his family and colleagues, Susan Hough takes the reader deep into Richter’s complex life story, setting it in the context of his family and interpersonal attachments, his academic career, and the history of seismology.

Among his colleagues Richter was known as intensely private, passionately interested in earthquakes, and iconoclastic. He was an avid nudist, seismologists tell each other with a grin; he dabbled in poetry. He was a publicity hound, some suggest, and more famous than he deserved to be. But even his closest associates were unaware that he struggled to reconcile an intense and abiding need for artistic expression with his scientific interests, or that his apparently strained relationship with his wife was more unconventional but also stronger than they knew. Moreover, they never realized that his well-known foibles might even have been the consequence of a profound neurological disorder.

In this biography, Susan Hough artfully interweaves the stories of Richter’s life with the history of earthquake exploration and seismology. In doing so, she illuminates the world of earth science for the lay reader, much as Sylvia Nasar brought the world of mathematics alive in A Beautiful Mind.