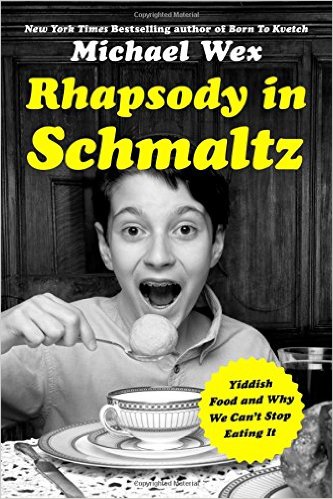 Rhapsody in Schmaltz is a journey into the sociology, humor, history, and traditions of food and Judaism.

Yiddish Food and Why We Can't Stop Eating It

Bagels, deli sandwiches and gefilte fish are only a few of the Jewish foods to have crossed into American culture and onto American plates. Rhapsody in Schmaltz traces the history and social impact of the cuisine that Yiddish-speaking Jews from Central and Eastern Europe brought to the U.S. and that their American descendants developed and refined. The book looks at how and where these dishes came to be, how they varied from region to region, the role they played in Jewish culture in Europe, and the role that they play in Jewish and more general American culture and foodways today.

Rhapsody in Schmaltz traces the pathways of Jewish food from the Bible and Talmud, to Eastern Europe, to its popular landing pads in North America today. With an eye for detail and a healthy dose of humor, Michael Wex also examines how these impact modern culture, from temple to television. He looks at Diane Keaton’s pastrami sandwich in Annie Hall, Andy Kaufman’s stint as Latke on Taxi and Larry David’s Passover seder on Curb Your Enthusiasm, shedding light on how Jewish food permeates our modern imaginations.

Rhapsody in Schmaltz is a journey into the sociology, humor, history, and traditions of food and Judaism.