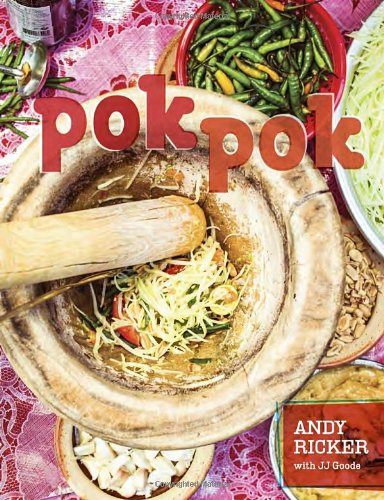 Food and Stories from the Streets, Homes, and Roadside Restaurants of Thailand

A guide to bold, authentic Thai cooking from Andy Ricker, the chef and owner of the wildly popular and widely lauded Pok Pok restaurants.

After decades spent traveling throughout Thailand, Andy Ricker wanted to bring the country’s famed food stateside. In 2005 he opened Pok Pok, so named for the sound a wooden pestle makes when it strikes a clay mortar, in an old shack in a residential neighborhood of Portland, Oregon. Ricker has since gone on to open five more wildly popular Pok Pok restaurants, and today he is considered one of the leading American voices on Thai cooking.

But Pok Pok is more than just a collection of favorite recipes: it is also a master course in Thai cooking from one of the most passionate and knowledgeable authorities on the subject. Clearly written, impeccably tested recipes teach you how to source ingredients; master fundamental Thai cooking techniques and skills; understand flavor profiles that are unique to Southeast Asian cuisine; and combine various dishes to create show-stopping, well-balanced meals for family and friends.

Filled with thoughtful, colorful essays about Ricker’s travels and experiences, Pok Pok is not only a definitive resource for home cooks, but also a celebration of the rich history, vibrant culture, and unparalleled deliciousness of Thai food.

Prev: Poisonfeather
Next: POK POK The Drinking Food of Thailand