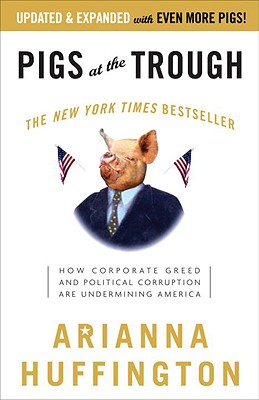 Pigs at the Trough

Who filled the trough? Who set the table at the banquet of greed? How has it been possible for corporate pigs to gorge themselves on grossly inflated pay packages and heaping helpings of stock options while the average American struggles to make do with their leftovers?

Provocative political commentator Arianna Huffington yanks back the curtain on the unholy alliance of CEOs, politicians, lobbyists, and Wall Street bankers who have shown a brutal disregard for those in the office cubicles and on the factory floors. As she puts it:

“The economic game is not supposed to be rigged like some shady ring toss on a carnival midway.” Yet it has been, allowing corporate crooks to bilk the public out of trillions of dollars, magically making our pensions and 401(k)s disappear and walking away with astronomical payouts and absurdly lavish perks-for-life.

The media have put their fingers on pieces of the sordid puzzle, but Pigs at the Trough presents the whole ugly picture of what’s really going on for the first time,a blistering, wickedly witty portrait of exactly how and why the worst and the greediest are running American business and government into the ground.

Tyco’s Dennis Kozlowski, Adelphia’s John Rigas, and the Three Horsemen of the Enron Apocalypse,Ken Lay, Jeff Skilling, and Andrew Fastow,are not just a few bad apples. They are manifestations of a megatrend in corporate leadership,the rise of a callous and avaricious mind-set that is wildly out of whack with the core values of the average American. WorldCom, Enron, Adelphia, Tyco, AOL, Xerox, Merrill Lynch, and the other scandals are only the tip of the tip of the corruption iceberg.

Making the case that our public watchdogs have become little more than obedient lapdogs, unwilling to bite the corporate hand that feeds them, Arianna Huffington turns the spotlight on the tough reforms we must demand from Washington. We need, she argues, to go way beyond the lame Corporate Responsibility Act if we are to stop the voracious corporate predators from eating away at the very foundations of our democracy.

Devastatingly funny and powerfully indicting, Pigs at the Trough is a rousing call to arms and a must-read for all those who are outraged by the scandalous state of corporate America.