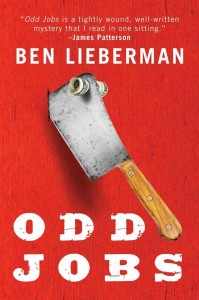 Since his father’s murder, Kevin Davenport has worked every odd job known to man to support himself and his widowed mother. But when he signs on to haul beef at Kosher World Meat Factory, what he thought was just another lousy part-time gig turns out to be the opportunity of a lifetime.

Kevin discovers that the meatpacking business is a front for a treacherous criminal syndicate. While working at the corrupt meat factory he finds out who killed his father and now all bets are off. Kevin has the chance to settle the score and he’ll tackle any job—club fighting, bookmaking, even drug dealing—to earn his revenge. But can he do it all without sacrificing his soul…or, God forbid, flunking out of school?

Praised by bestselling author James Patterson as “a tightly-wound, well-written mystery that I read in one sitting,” Odd Jobs introduces a bold and edgy new voice to the ranks of American crime fiction.

Prev: Occupation Diaries
Next: Of Moths and Men