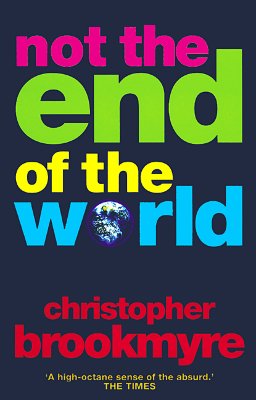 Not the End of the World

Christopher Brookmyre’s critically acclaimed, award-winning comic thrillers are a sensation in his native Britain. The Times (London) has praised his writing for being “perpetually in-your-face: sassy, irreverent, and stylish” with “a high-octane sense of the absurd,” and the Literary Review has raved that his books are “very violent, very funny ... comedy with a political edge, which you take gleefully in one gulp.” Now he has his much-anticipated American debut with Not the End of the World, a fast and furious novel set in Los Angeles at the near side of the millennium, at a point when the world is about to spin out of control—and maybe out of existence. When an oceanic research vessel is discovered with all of its crew vanished, it sets off a chain of events that pulls Sergeant Larry Freeman of the L.A.P.D. out of the ho-hum assignment of overseeing the security for a B-movie film festival and headlong into a frenzied race to stop a terrorist plot. Along the way he must contend with aging porn stars, rabid evangelical Christians, and a mysterious Glaswegian photographer with an unknown agenda, all in a full-throttled—and ultimately hysterical—race against time.

Prev: Not That Kind of Girl
Next: Not Without You