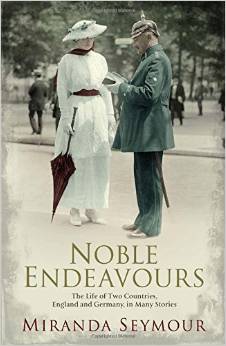 The Life of Two Countries. England and Germany in Many Stories

In 1613 a beautiful Stuart princess married a handsome young German prince. This was a love match, but it was also an alliance that aimed to weld together Europe’s two great Protestant powers. Before Elizabeth and Frederick left London for the court in Heidelberg, they watched a performance of The Winter’s Tale. In 1943, a group of British POWS gave a performance of that same play to a group of enthusiastic Nazi guards in Bavaria. When the amateur actors suggested doing a version of The Merchant of Venice that showed Shylock as the hero, the guards brought in the costumes and helped create the sets. Nothing about the story of England and Germany, as this remarkable book demonstrates, is as simple as we might expect. A shared faith, a shared hunger for power, a shared culture (Germany never doubted that Shakespeare belonged to them, as much as to England); a shared leadership. German monarchs ruled over England for three hundred years - and only ceased to do so through a change of name. Miranda Seymour has written a rich and heart-breaking story that needs to be heard: the vibrant, extraordinary history - told through the lives of kings and painters, soldiers and sailors, sugar-bakers and bankers, charlatans and saints - of two countries so entwined that one man, asked for his allegiance in 1916, said he didn’t know because it felt as though his parents had quarrelled. Thirteen years of Nazi power can never be forgotten. But should thirteen years blot out four centuries of a profound, if rivalrous, friendship? Speaking in 1984, a remarkable Jew who fought for Germany in one war and for England in the next called for an end to the years of mistrust. Quarter of a century later, that mistrust remains as strong as ever and Hitler remains Germany’s most familiar face. The stories that Miranda Seymour has recovered from a wealth of unpublished material and exceptional sources, remind us, poignantly, wittily and tragically, of all that we have chosen to forget.

Prev: Noble Ambitions: The Fall and Rise of the English Country House After World War II
Next: Noble Rot: A Bordeaux Wine Revolution