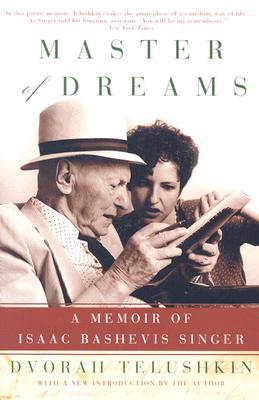 Masters of Dreams: A Memoir of Isaac Bashevis Singer

In 1975, twenty-one-year-old Dvorah Telushkin wrote a letter to the great Yiddish writer Isaac Bashevis Singer, offering to drive him to and from a creative writing class in return for permission to attend the course. The literary master, then seventy-one, accepted the offer, which led to a twelve-year-long apprenticeship for Telushkin.

Throughout Dvorah Telushkin’s tenure with Singer, she kept detailed diaries chronicling both their literary efforts and the evolution of their personal relationship. Indeed, Telushkin was the one person to whom Singer tried to teach his craft as a writer. She writes about the great moments in Singer’s public life, his winning the Nobel Prize in Literature in 1978, his fiery encounter with the Israeli prime minister Menachem Begin, his surprising meeting with Barbra Streisand, who adapted and starred in the movie version of Singer’s short story “Yentl.” But the private Singer is revealed as well, the “merry pessimist” haunted by despair and torn between the old-world ethic of his Hasidic forebears in Europe and the moral abandon of modern secular man.