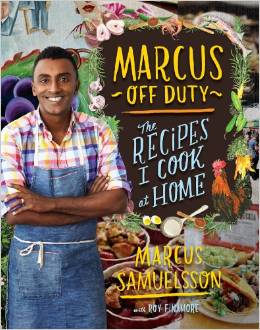 The Recipes I Cook at Home

For two decades, Marcus Samuelsson has captivated food lovers with his brilliant culinary interpretations. Born in Ethiopia, raised in Sweden, and trained in European kitchens, he is a world citizen turned American success story. Not only was Samuelsson the youngest chef ever to receive three stars from the New York Times, he is also a five-time James Beard Award recipient, a winner of Top Chef Masters, and a judge on Chopped. Chosen by President Obama to cook the first state dinner, he is now a charismatic TV host.

In this book, the chef who former President Bill Clinton says “has reinvigorated and reimagined what it means to be American” serves up the dishes he makes at his Harlem home for his wife and friends. The recipes blend a rainbow of the flavors he experienced in his travels—Ethiopian, Swedish, Mexican, Caribbean, Italian, and Southern soul. His eclectic, casual food includes dill-spiced salmon; coconut-lime curried chicken; mac, cheese, and greens; chocolate pie spiced with Indian garam masala; and for kids, peanut noodles with slaw. This is an inside glimpse into how one of the world’s top chefs cooks in his home kitchen for those nearest and dearest to him.