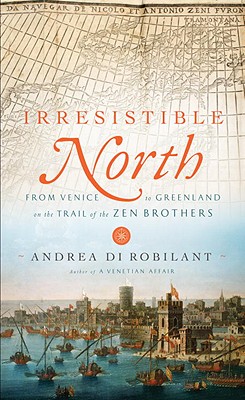 From Venice to Greenland on the Trail of the Zen Brothers

From the author of A Venetian Affair and Lucia comes a charming odyssey in the path of the mysterious Zen brothers, who explored parts of the New World a century before Columbus, and became both a source of scandal and a cause célèbre among geographers in the following centuries.

This delightful journey begins with Andrea di Robilant’s serendipitous discovery of a travel narrative published in Venice in 1558 by the Renaissance statesman Nicolò Zen: the text and its fascinating nautical map re-created the travels of two of the author’s ancestors, brothers who explored the North Atlantic in the 1380s and 1390s. Di Robilant set out to discover why later, in the nineteenth century, the Zens’ account came under attack as one of the greatest frauds in geographical history. Was their map—and even their journey—partially or perhaps entirely faked?

In Irresistible North the author follows the Zens’ route from the Faeroes to Shetland to Iceland and Greenland, greeted by characters who help unravel the enigmas in the Zens’ account. The medieval world comes to life as di Robilant guides us through a landscape enlivened by the ghosts of power-hungry earls and bishops of the old Norwegian realm and magical tales of hot springs and smoking mountains. In this rich telling—an original work of history and a travel book in one—the magnetism of the north draws us in as powerfully as it drew the Zen brothers more than six centuries ago.