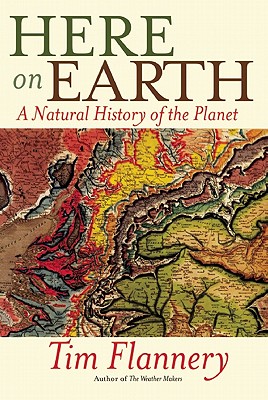 Beginning at the moment of creation with the Big Bang, Here on Earth explores the evolution of Earth from a galactic cloud of dust and gas to a planet with a metallic core and early signs of life within a billion years of being created. In a compelling narrative, Flannery describes the formation of the Earth’s crust and atmosphere, as well as the transformation of the planet’s oceans from toxic brews of metals (such as iron, copper, and lead) to life-sustaining bodies covering 70 percent of the planet’s surface. Life, Flannery shows, first appeared in these oceans in the form of microscopic plants and bacteria, and these metals served as catalysts for the earliest biological processes known to exist. From this starting point, Flannery tells the fascinating story of the evolution of our own species, exploring several early human species—from the diminutive creatures (the famed hobbits) who lived in Africa around two million years ago to Homo erectus—before turning his attention to Homo sapiens. Drawing on Charles Darwin’s and Alfred Russell Wallace’s theories of evolution and Lovelock’s Gaia hypothesis, Here on Earth is a dazzling account of life on our planet.

Prev: Here Let Us Feast
Next: Here's to Us