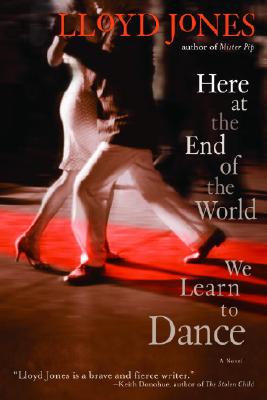 Here at the End of the World We Learn To Dance

In tango, there are no wrong turns. But every dance begins with a backward step.

Taking his cue from the tango, the acclaimed author of Mister Pip has written a thrilling and sensuous novel about how we fall in love.

Ranging from rural New Zealand during the final days of World War I to Buenos Aires at mid-century to the present day, this masterful novel intertwines two love stories across three generations. The deep suspicions of an isolated community in the midst of war force Louise and Schmidt—two near-strangers—to hide in a cave overlooking the ocean. Desperate for solace, Schmidt teaches Louise the tango, and the iconic dance becomes their mutual obsession and the trigger for an affair that will span continents.

Years later, Schmidt’s granddaughter, keeper of the family secrets, owns a restaurant in Wellington where a shy young student named Lionel washes the dishes. One day she snaps her fingers in his direction and says: “I need to dance.”

Brilliantly evoking the seductive power of one of the world’s most famous dances, Lloyd Jones’s novel is a virtuoso performance.

Prev: Here All Along
Next: Here Let Us Feast