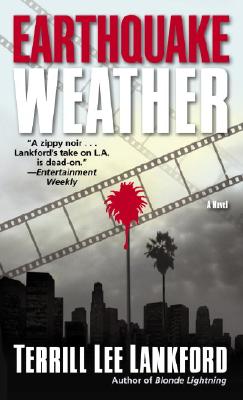 A veteran filmmaker and novelist now creates a riveting noir set in the power-mad jungle of Hollywood. In Earthquake Weather a natural disaster shakes a city and an industry to their cores, revealing new layers of deceit, desire, and deadly aggression.

Hollywood. The land of dreams and schemes. Mark Hayes has a dream. To make movies. But that’s easier wished for than done. Years of frustrating career moves have yielded little progress and Mark now finds himself in a dead end job as a “creative executive” for the loathsome producer, Dexter Morton at Prescient Pictures, the hottest new production company in town. A job like that could lead to big things,but Dexter Morton has no interest in promoting Mark’s ambitions. Then a major earthquake rocks Los Angeles and all deals are off. And when Mark finds a body floating in Dexter’s pool he goes from D-Boy to murder suspect before he can say “three picture deal”.

In the interest of self-preservation Mark must find out who the true killer is before he is jailed or becomes the next victim. The list of suspects is long: The hot young screenwriter who has been fired from his own project, the director of Prescient Pictures’ most recent film who will do anything for final cut, the re-write man who has been toiling in anonymity for years because he passed forty ages ago, the wanna-be actress who would do anything,and anyone, for stardom, the blackmailing producer who knows more about the staff of Prescient Pictures than anyone wants to admit.

As the noose tightens around the guilty and innocent alike, tensions rise and the earth rumbles. No one can trust the ground they walk on or the people they work with. In a town where power and control can shift suddenly, everyone wants credit for everything,except, of course, murder.