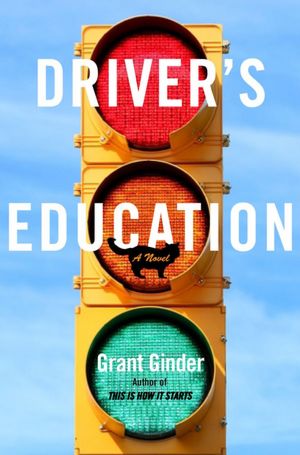 In the tradition of Big Fish, Grant Ginder's Driver's Education is a poignant and eccentric novel about fathers, sons, and the power of stories to change the way we see the world—and the people—around us.

When he was a younger man, Alistair McPhee was fond of escaping in his trusty ’56 Chevy Bel Air, Lucy, named for the cherished wife who died when their son Colin was only nine. Colin, yearning for a way to connect to his itinerant father, turned to writing screenplays inspired by the classic films they used to watch together, while Colin’s own son, Finn, grew up listening to his grandfather spin tales of danger, heartbreak, and redemption on the road.

Now on his deathbed, Alistair charges his grandson: bring Lucy to him. The long road west will lead Finn, his disgruntled friend Randall, and an ancient three-legged tabby cat named Mrs. Dalloway through the very cities that supposedly bore witness to Alistair’s greatest adventures. A powerful and moving achievement, Driver’s Education is an adventure that puts Grant Ginder’s outstanding literary gifts in bold relief.