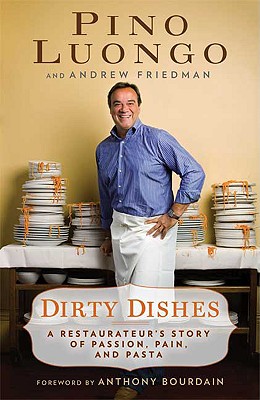 Everyone has an opinion about Pino Luongo. To Anthony Bourdain, he was the notorious Pino Noir, the shadowy kingpin of a restaurant empire. To Manhattanites, he was either the savior or the scourge of the city’s dining scene. To the many fans of his cookbooks, he was the herald of T uscan cuisine.

In Dirty Dishes, Luongo emerges to tell his side of the story. And what a story: After an idyllic (and well-fed) childhood in Tuscany, Luongo came to New York as an actor, but soon fell into, and then in love with, the restaurant business. Within ten years, he had risen from a position as a dishwasher to build a string of the hottest restaurants in the city. In the decade that followed, he reigned as one of the undisputed kings of New York nightlife, earning a reputation for brilliance, charm, and volatility. But after a flirtation with a corporate chain went sour, he left behind the empire he had built and returned to his first love: the kitchen.

Luongo is a natural raconteur, and his memoir is full of hilarious and jaw-dropping stories of the New Y ork restaurant world, taking in everyone from Sylvester Stallone and Jackie Onassis to Andy Warhol and Tim Zagat. Accompanying all this are ten of Luongo’s all-time favorite recipes. For fans of Kitchen Confidential and The Devil in the Kitchen, this book is not to be missed.