— some verging on salacious on Delizia 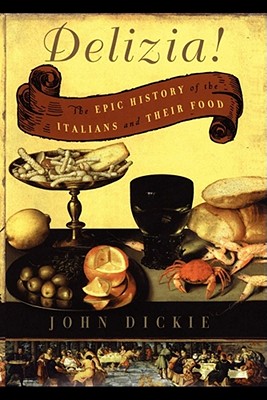 Buon appetito! Everyone loves Italian food. But how did the Italians come to eat so well? The answer lies amid the vibrant beauty of Italy’s historic cities. For a thousand years, they have been magnets for everything that makes for great eating: ingredients, talent, money, and power. Italian food is city food.

From the bustle of medieval Milan’s marketplace to the banqueting halls of Renaissance Ferrara; from street stalls in the putrid alleyways of nineteenth-century Naples to the noisy trattorie of postwar Rome: in rich slices of urban life, historian and master storyteller John Dickie shows how taste, creativity, and civic pride blended with princely arrogance, political violence, and dark intrigue to create the world’s favorite cuisine. Delizia! is much more than a history of Italian food. It is a history of Italy told through the flavors and character of its cities.

A dynamic chronicle that is full of surprises, Delizia! draws back the curtain on much that was unknown about Italian food and exposes the long-held canards. It interprets the ancient Arabic map that tells of pasta’s true origins, and shows that Marco Polo did not introduce spaghetti to the Italians, as is often thought, but did have a big influence on making pasta a part of the American diet. It seeks out the medieval recipes that reveal Italy’s long love affair with exotic spices, and introduces the great Renaissance cookery writer who plotted to murder the Pope even as he detailed the aphrodisiac qualities of his ingredients. It moves from the opulent theater of a Renaissance wedding banquet, with its gargantuan ten-course menu comprising hundreds of separate dishes, to the thin soups and bland polentas that would eventually force millions to emigrate to the New World. It shows how early pizzas were disgusting and why Mussolini championed risotto. Most important, it explains the origins and growth of the world’s greatest urban food culture.

With its delectable mix of vivid storytelling, groundbreaking research, and shrewd analysis, Delizia! is as appetizing as the dishes it describes. This passionate account of Italy’s civilization of the table will satisfy foodies, history buffs, Italophiles, travelers, students—and anyone who loves a well-told tale.