“In the New Orleans of Buster Voodoo, magic and death court each other like lovers, but this is no romantic tale of French Quarter courtyards and gas-lit alleys; its brutality and its beauty live in the meaner streets. This is a story of deep blood ties, murder, and a storm that drowned a city. Avoiding the cliches and cutting to the absolute, often ugly truth of the place, Mason James Cole is writing about New Orleans and its environs as well as any living author. ” 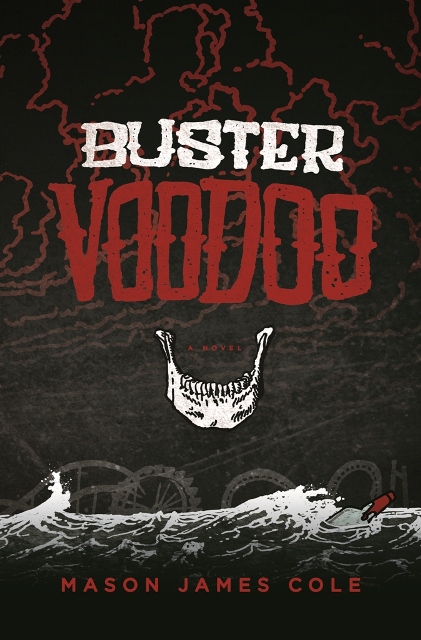 The author of the cult hit Pray To Stay Dead, returns with a chilling novel that contrasts the horrors of the imagination with the horrors of the real world, set against the backdrop of New Orleans in the weeks leading up to Hurricane Katrina.

Dixon Green is no stranger to fear.

Growing up the son of a Voodoo priestess in a poor black neighborhood in New Orleans, Dixon has witnessed pain, violence, desperation, and death. When children start to disappear in the Tremé, people suspect that feral dogs are to blame, or perhaps a roogaroo—a werewolf. But soon, when Dixon’s sister goes missing, word spreads that a terrifying legend is to blame: Buster Voodoo is back.

Many years later, Dixon works as a janitor at a second-rate theme park where he’s biding his time with a bottle in his hand. Downtrodden and lonesome, his life is devoid of the magic and mystery of his childhood. That all changes when children begin to disappear into the darkness of a ride called Marie Laveau’s Zombie Nightmare. Only Dixon seems to realize what’s happening and only Dixon knows how to fight it. As he begins to question his sanity—did Buster Voodoo really kidnap all those children or is he just losing his grip on reality?—a deadly force looms on the horizon that is far more powerful than any boogeyman: Hurricane Katrina.

In a gripping interlaced narrative that builds to a devastating climax, Dixon uncovers the terrible realities behind his sister’s disappearance—and his mother’s dark secrets—in 1948, and struggles to survive the dark days that follow in Katrina’s wake. Suspenseful and heartrending, Buster Voodoo is a fever-dream that reads like Stephen King by way of Alice Walker—a glimpse of a sad world on the brink of disaster and the story of one man who is trying to unravel a haunting mystery from his childhood.

Prev: Buster Undercover
Next: Butler To The World