“A historical thriller with a touch of romance and more than a hint of necromancy… Brilliantly imagined and grippingly executed.”

— The Times (London) on Bones of Avalon 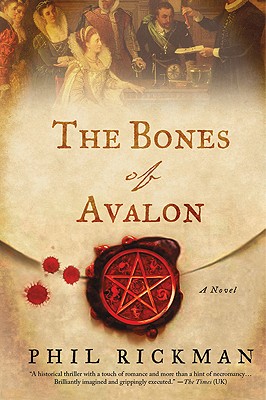 A country divided. A newly crowned, desperately vulnerable young queen. Can one man uncover the secret that will save her throne?

It is 1560, and Elizabeth Tudor has been on the throne for a year. Dr. John Dee, at 32 already acclaimed throughout Europe, is her astrologer and consultant in the hidden arts… a controversial appointment in these days of superstition and religious strife.

When dangerous questions of Elizabeth’s legitimacy arise, the mild, bookish Dee finds himself summoned before William Cecil, who tasks him with an important mission. Along with Robert Dudley, Dee’s daring friend and former student who is also rumored to be the Queen’s secret lover, Dee must travel to the famously mystical town of Glastonbury to find the missing bones of King Arthur. Once these long-lost relics, the embodiment of a legacy vitally important to the Tudor line, are ensconced in London, doubts as to the Queen’s supremacy as the rightful Tudor heir will be dispelled.

But the quest quickly turns deadly—Dee and Dudley arrive in Glastonbury to discover the town mourning the gruesome execution of its abbot, and more death soon follows at the old abbey. Racing to uncover the secrets buried there, Dee finds himself caught in the tangled roots of English magic, unexpected violence, the breathless stirring of first love… and the cold heart of a complex plot against Elizabeth.