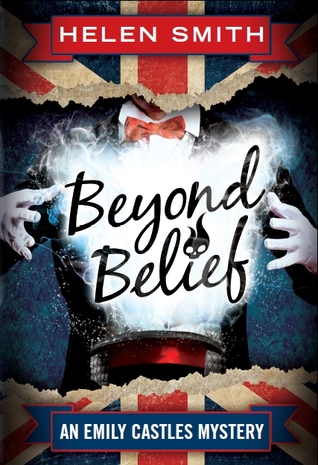 Emily Castles, spare-time private investigator, full-time desk jockey is at it again! When renowned psychic Perspicacious Peg predicts a murder will occur at England’s Belief and Beyond conference, her skeptical colleagues recruit twenty-six-year-old budding sleuth Emily to attend the event to investigate. The suspected victim is illusionist Edmund Zenon, who plans to perform a daring stunt at the conference.

In the seaside town of Torquay, Emily meets a colorful cast of characters: dramatic fortune-teller Madame Nova; kindly Bobby Blue Suit and his three psychic dachshunds; Sarah and Tim Taylor, devastated parents mourning their late son; and religious cult members Hilary, Trina, and the Colonel. Tensions rise as believers in science, the supernatural, and the spiritual clash with one another. But once a body count begins, Emily must excuse herself from the séances and positivity circles, and use old-fashioned detective work to find the killer.

Prev: Between Two Worlds
Next: Beyond Diet