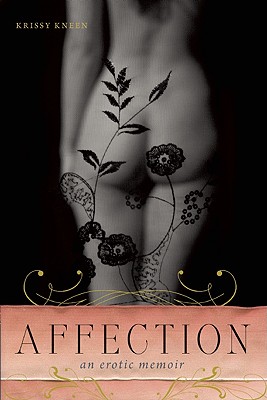 Krissy Kneen loves sex . . . and she’s not afraid to talk about it. In this sometimes hilarious, sometimes poignant, and sometimes terrifying memoir, she traces the arc of her sexual life — from her childhood in a sexless household to the myriad sexual encounters of her young and adult life to the present, in which she is a married (and monogamous) 40-year-old woman. Raised by a group of protective and eccentric women who expressly forbade any and every sign of sexuality, Krissy — an unusually sensual young girl — discovered early on that illicit pleasures are the best kind. Affection follows the path of Kneen’s life journey, from the compulsive sexual self-exploration of her childhood to her experiences as a young woman for whom the world is a sexual playground. Underlying the jaw-dropping details of her many sexual escapades is Kneen’s examination of how her sense of self shapes and is shaped by those experiences, and of her struggle to satisfy her own needs in the face of a limiting, and often judgmental, society. Affection is a frank, often erotic look at one woman’s sexuality as she grows and changes in a world that continues to see only the young and the beautiful amongst us as sexual beings — and a chronicle of her refusal to conform to that misconception.

Prev: Advice for Future Corpses (and Those Who Love Them:
Next: Afgantsy