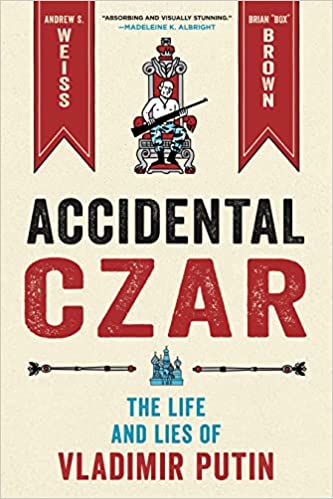 This riveting graphic novel biography chronicles Vladimir Putin's rise from a mid-level KGB officer to the autocratic leader of Russia and reveals the truth behind the strongman persona he has spent his career cultivating.

The Life and Lies of Vladimir Putin

In the West’s collective imagination, Vladimir Putin is a devious cartoon villain, constantly plotting and scheming to destroy his enemies around the globe and in Ukraine. But how did an undistinguished mid-level KGB officer become one of the most powerful leaders in Russian history? And how much of Putin’s tough-guy persona is a calculated performance?

In Accidental Czar, Andrew S. Weiss, a former White House Russia expert, and Brian “Box” Brown show how Putin has successfully cast himself as a cunning, larger-than-life political mastermind—and how the rest of the world has played into the Kremlin’s hands by treating him as one. They shatter all of these myths and expose the man behind the façade.

Prev: Accepting Powerlessness
Next: Accomodating Brocolli in the Cemetary