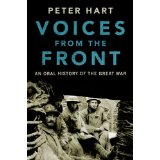 Here is an intimate and humanized account of the first great cataclysm of the twentieth century, one endured by the men whose voices we hear in this book, and whose legacies are with us still.

Voices from the Front

An Oral History of the Great War

In the 1980s and early 1990s, Peter Hart, then a young oral historian at the Imperial War Museum in London, conducted 183 interviews with British World War I veterans. After the death of the last veteran in 2009, these interviews have become a rare and invaluable record of the Great War, as remembered by the men who experienced it. The men spoke to Hart of the familiar horrors of the war-poison gas, lice, muddy trenches, newly minted tanks, and sinking ships-enriching each memory with personal anecdote, shedding light on war’s effect on soldiers both in wartime and during the years that followed.

Hart now returns to these interviews in Voices from the Front. His new book not only provides a narrative timeline of the events of 1914 to 1918, but restores individuality and humanity to the men who were often treated like expendable resources. Hart uses the transcripts of these conversations as a framework on which to build a unique depiction of Britain’s experience of the war-one separated from the boastful exaggerations or, alternatively, the underplaying euphemisms often found in letters mailed home or to fellow soldiers. By including the testimonies of men such as William Holbrook, who was just 15 when he enlisted, as well as Harold Bing, an anti-war demonstrator, Hart breathes new life into the experiences of both young soldiers and those who morally opposed the war. The result is history as both narrative and recollection; war experienced first-hand but looked at now from a great distance. Here is an intimate and humanized account of the first great cataclysm of the twentieth century, one endured by the men whose voices we hear in this book, and whose legacies are with us still.