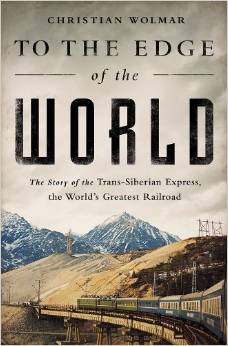 To the Edge of the World

Christian Wolmar passionately and expertly chronicles the story of what is often called Siberia’s lifeline. From its improbable conception and construction under Tsar Alexander III to the northern extension ordered by Brezhnev, Wolmar examines its continued success as a vital artery for the expansion of the Russian, and subsequently, of the Soviet state. The Trans-Siberian railroad fueled the Russo-Japanese War, the Russian Revolution, Civil War, and the Russian resistance to the Nazi invasion during the Second World War, among other bloody upheavals.

The rousing story of the Trans-Siberian is one of continuous change, extraordinary personalities, and formative political and economic events. This is first general history of the Trans-Siberian railway—the longest rail network in the world, stretching 6,000 miles of bleak winter. The iron tracks sprawl over the bulk of the Asian landmass that’s scarcely populated by disparate and numerous tribes—initially connecting the few who even spoke the official language of the Russian state with the exiled convicts and political prisoners serving out their terms in cruel labor camps where men were regularly beheaded, hanged, starved, or mutilated for minor offenses. And yet, despite this dismal backdrop, the increased stream of people fed into Siberia by the rail led to a drastic transformation through rapid urbanization and migrant settlements. Thanks to the iron road, Siberia has quickly become an inextricable part of Russia’s lore.

But To the Edge of the World is also an adventure in travel, and a journey that will forever evoke the romantic roam through the Russian steppes famously popularized by David Lean’s rich adaptation of Doctor Zhivago in 1965. It is the portrait of a railway that began as a meandering, single-track line with more curves than an average mountain pass. It would end up as a widely mythologized network of rails that continues to wield a profound influence on the world’s geopolitical system even today.

Prev: To the Edge of the World
Next: To the Tower Born