“Alford is an expert on all things Elizabethan, and his intimate knowledge of the queen’s ministers and the period’s political history guarantees the accuracy and thoroughness of this rip-roaring story…. Tracing the devious machinations of rebels and intelligence agents alike, Alford makes brilliant use of the intercepted letters, illegal publications and incendiary pamphlets found in the Elizabethan archives. A great spy novel—except that it’s all true.”

— Kirkus Reviews on The Watchers 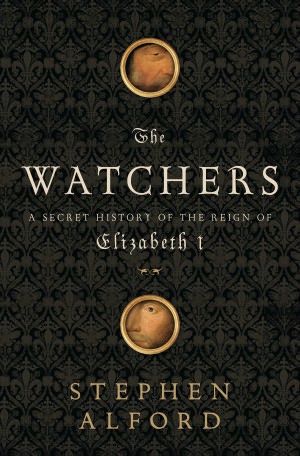 A Secret History of the Reign of Elizabeth I

In a Europe aflame with wars of religion and dynastic conflicts, Elizabeth I came to the throne of a realm encircled by menace. To the great Catholic powers of France and Spain, England was a heretic pariah state, a canker to be cut away for the health of the greater body of Christendom. Elizabeth’s government, defending God’s true Church of England and its leader, the queen, could stop at nothing to defend itself.Headed by the brilliant, enigmatic, and widely feared Sir Francis Walsingham, the Elizabethan state deployed every dark art: spies, double agents, cryptography, and torture. Delving deeply into sixteenth-century archives, Stephen Alford offers a groundbreaking, chillingly vivid depiction of Elizabethan espionage, literally recovering it from the shadows. In his company we follow Her Majesty’s agents through the streets of London and Rome, and into the dank cells of the Tower. We see the world as they saw it-ever unsure who could be trusted or when the fatal knock on their own door might come. The Watchers is a riveting exploration of loyalty, faith, betrayal, and deception with the highest possible stakes, in a world poised between the Middle Ages and modernity.

Prev: The Warren Commission Report
Next: The Water Theatre