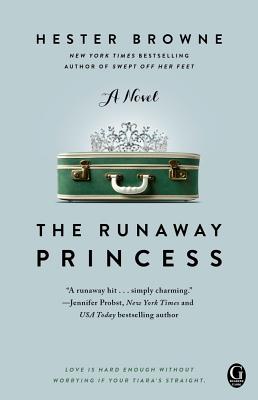 Renowned for her fresh and lively characters and sharp wit, Hester Browne, bestselling author of the Little Lady novels, delivers a tale that strikes a perfect note in these royal-obsessed times.

As a high-rise gardener in London, Amy Wilde can make roses and salad leaves spring out of nowhere. But it’s love that blossoms when the normally withdrawn Londoner meets Leo at one of the parties thrown by her socialite friend. Tall, blond, and startlingly handsome, Leo is incredibly easygoing, as if he’s been brought up to make small talk with complete strangers. In fact, he was,and after a delightfully romantic date, he admits that his real name is Leopold,Prince Leopold III of Nirona, a wealthy European principality. After the two become engaged, a scandal makes Leo the heir to his nation’s throne and his mood abruptly changes. As the extravagant wedding plans consume the little country, Amy feels increasingly apprehensive and unsure of whether she’s the girl Leo thinks she is,especially with a scandal brewing within her own family. But can she run from her true love,and the glitter of royalty,and return to life as a commoner?

Prev: The Rumor
Next: The Runner