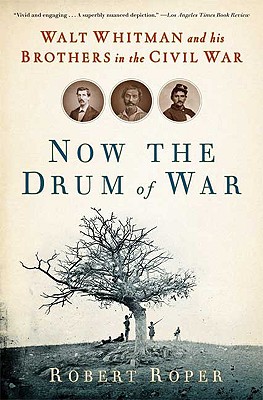 Now the Drum of War: The Brothers Whitman in the Civil War

Walt Whitman’s work as a nurse to the wounded soldiers of the Civil War had a profound effect on the way he saw the world. Much less well known is the extraordinary record of his younger brother George Washington Whitman, who led his men in twenty-one major battles almost to die in a Confederate prison camp as the fighting ended. Drawing on the searing letters that Walt, George, their mother Louisa, and their other brothers wrote to each other during the conflict, Now the Drum of War chronicles the experience of an archetypal American family enduring its own long crisis alongside the anguish of the nation. Robert Roper has constructed a powerful narrative about America’s greatest crucible, and a compelling, braided story of our most original poet and one of our bravest soldiers.