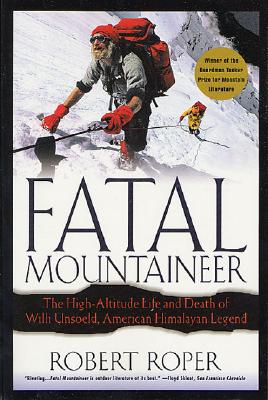 In 1963, Willi Unsoeld became an international hero for his conquest of the West Ridge of Everest. A charismatic professor of philosophy, Unsoeld was one of the greatest climbers of the twentiethth century, a man whose raw physical power and casual fearlessness inspired a generation of adventurers.

In 1976, during an expedition to Nanda Devi, the tallest peak in India, Unsoeld’s philosophy of spiritual growth through mortal risk was tragically tested. The outcome of that expedition continues to fuel one of the most fascinating debates in mountaineering history.

Fatal Mountaineer is a gripping look at Willi Unsoeld and the epic climbs that defined him—-a classic narrative blending action with ethics, fame with tragedy, a man’s ambition with a father’s anguish.

Prev: Fat Is a Family Affair
Next: Fathermothergod